Sweet T (Teodoro) is a character that appears in i-Ready Reading and Math lessons Level B to Level H. His first appearance was in the Level B lesson named "Solve Two-Step Problems" with Pepper Jackie. Sweet T has a hobby for eating sweets (so much that Pepper Jackie thinks that the T in his name stands for Tooth as in Sweet Tooth). He usually wears an orange shirt with a figure skateboarding. Sweet T has an average hair length. Sweet T often appears with (but not limited to) Pepper Jackie and Jake. Speaking of him having a sweet hobby, which is probably the reason he also works at Bake Stars Café. In the older i-Ready lessons (emphasized in the i-Ready Reading lesson "Examining Figurative Language in Literature" Level F) versions, Sweet T has a crush on Bella. In "Understand Multiplication as Scaling" Level E It reveals Sweet T's Real Name Teodoro. Sweet T has his own room. It is also known that Sweet T used to have a second job at a super market. The Suh-weet Bumper Only Appears In Bake Stars Lessons.

Sweet T is mostly Considered as a foodie and with character traits from characters such as Bart Simpson or Max Goof. Sweet T is very kind, and he is best friends with Pepper Jackie. Sweet T is a fan of things like Skateboarding and Rock Music.

In the older lessons, Sweet T is slender with an orange T-Shirt, the icon on his T-Shirt is a Skateboarder. He also wears Jeans and red sneakers. He has a Watch on his right arm and has brown skin. He has Black hair and a beanie. In the modern i-Ready lessons, He doesn't have a beanie and is less skinny. He instead wears a yellow tannish shirt with a green arrow.

Sweet T's friends are (but not limited to):

Sweet-T is voiced by Jess Harnell. 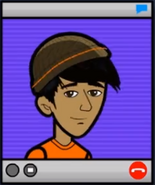 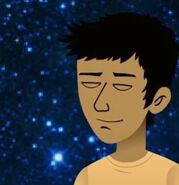 Sweet T with Snargg And Rocky

Sweet T smiling with clouds in the background

Sweet T Saying "Why are we taking the i-Ready diagnostic?"

Sweet T Along With Rocky, Jake, And PJ